Herpetologist – noun – \ˌhər-pə-ˈtä-lə-jist\: One Who Specializes in Study of Reptiles and Amphibians

“The Tale of Bundy”

“Optimist” is a word which refers to a person who thinks hopeful and pleasant thoughts about nearly everything. For instance, if an optimist had his left arm chewed off by an alligator, he might say, in a pleasant and hopeful voice, “Well, this isn’t too bad. I don’t have my left arm anymore, but at least nobody will ever ask me whether I am right-handed or left-handed,” but most of us would say something more along the lines of “Aaaaah! My arm! My arm!”
– Lemony Snicket 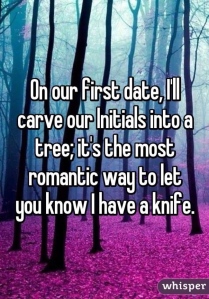 Oh Match.com – why can’t I quit you? True, it’s been a couple of years since I dared to subscribe to you and your tempting lure of false hope. And yet every few months, I consider signing up again. BUT WHY? Every normal guy I meet looks at me as if I were some interesting species of rodent. And yet every creepy weirdo finds me absolutely irresistible. Although I hear about so many happy soulmates who you have brought together, you have failed to bring me anything but losers and psychopaths.

Speaking of psychopaths, I think there’s a chance that the last actual honest-to-goodness date that I was on was with a serial killer. I’m going to call him “Bundy.” Much like the real life murderer Ted Bundy, this guy seemed charming and friendly. He reminded me of some awkwardly endearing British actor. Tall, lanky stature? Check. Roguish mop of hair flopping down into chocolatey brown eyes? Check. Beaky yet adorable nose slightly too big for his face? Check. Sweetly quirky sense of humor? Check.

I guess it doesn’t matter how many bad dates I have. I’ve accepted that I will always be optimistic and excited by the possibility of meeting a good man. Though I try to fight it every single time, I can’t stop myself from hoping. Like Emily Dickinson wrote:

“Hope” is the thing with feathers –
That perches in the soul –
And sings the tune without the words –
And never stops – at all.

To be honest? The cynic in me would like to shoot that stupid “hope bird” right out of my own heart with a BB gun so all of this nonsense and bullshit could be avoided.

Picture it. Greensboro. The summer of 2014. A certain curly-haired 31-year-old is hoping that curse on her love life may finally be broken…

After a month of texting and a couple of phone calls, Bundy and I planned our first date. Dinner at Applebee’s followed by a stroll through Barnes & Noble. So what if his sense of humor seemed even… quirkier… on the phone? Food AND books? What could go wrong?

A dead cat. That is what could go wrong.

Just kidding! Do you really think I have a bad date story involving a dead cat? That would be absurd! Stuff like that doesn’t happen in real life.

It was actually a dead kitten.

A few hours before we were supposed to meet up, my phone rang. In a choked voice, Bundy told me that his kitten had just died. The Facebook photos of the tiny kitten he’d found on the engine of his truck immediately flashed through my mind. After reaching out to see if anyone would adopt it, he had decided to keep it. “Lil Bit” had only been a few weeks old. Bundy didn’t know that I already knew all of this, because of course I wanted to keep that Facebook stalking on the down low. I listened as he told me the story that I already knew. 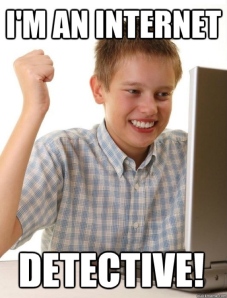 If you know me at all, you know that I am an animal lover. So hearing Bundy’s words stirred a strange mix of thoughts and emotions in me:

I asked Bundy if he would like to wait until another day to get together. To my surprise, he still wanted to go. “It would probably be better,” be sniffled, “for me to get out of the house and not think about it.”

That evening, Bundy and I parked next to each other in the Applebee’s parking lot. As he got out of the truck said hello, immediately my nurturing instincts kicked in. I hugged him and asked how he was holding up. He looked like a big, goofy, sad puppy. He apologized for being upset, and then handed me his iPhone.

“You want to see her? Here are some pictures. Lil Bit was such a sweet little thing. I can’t believe she’s gone. I hope I don’t have any wood stain on my clothes anywhere. Right before I came, I just finished building her a little casket. It turned out real nice. Actually, before I buried her I took a few pictures of her in there. Do you think that’s weird? Most people would probably think that was weird. But I think it’s going to help me cope. You know? I guess I won’t show you those pictures. Unless you want to see them…”

Um, yeah… No thanks, dude. Ignoring the unasked question lingering in the air, I pasted on a sweet smile, patted his back, and thanked him for sharing his feelings with me. (I may or may not have been channeling my inner second grade teacher at this point.) With that, we headed inside to have dinner.

I suppose you could say that dinner conversation was interesting. Bundy must have been determined to swallow his feelings and move on, because he quickly became a lively, enthusiastic dinner companion. Over Oriental Chicken Rollups, I learned more things about him:

Bundy’s favorite hobby was photographing knives. He also enjoyed collecting them. Spreading out his collection on the perfect backdrop, with just the right lighting? That was his passion. Hmmm.

Bundy still lived with his mama on their big farm. He didn’t see why so many people were in such a hurry to move out of their childhood homes. At twenty-nine, he was in no rush to get his own place.

Bundy didn’t really like hunting. He didn’t get the appeal of sitting in the woods waiting for deer to come wandering through. But what DID give him a rush was killing “pest animals” on the farm. Clearing out a nest of squirrels from a tree in the front yard? AWESOME! Getting rid of the chipmunk family in the garage? SWEET! Taking down the groundhog by the driveway? EVEN BETTER!

In fact, Bundy’s mama had a theory. She thought that the kitten had been sent to him to teach him a lesson to respect all forms of life. It turns out that Bundy had really wanted to go ahead and “take care” of the stray cats that hung around the farm. The only thing stopping him was the fact that his mama wouldn’t let him. That was how Lil Bit had ended up orphaned on the engine of his truck.

At this point I guess he finally noticed my look of horror, because he suddenly seemed self-conscious. Quietly, he asked me if that made him a bad person. Being direct and blunt is not one of my talents. In fact, I sometimes sugar-coat things so thoroughly that I could work part-time for Willy Wonka. So I smiled nervously, told him I was glad that he got to spend time with Lil Bit before she passed away, and changed the subject.

Here’s the thing, though. The weird thing. The baffling thing. When he wasn’t sounding like a total psychopath, Bundy was actually funny and completely charming. Hilariously self-depreciating anecdotes were sprinkled with thoughtful questions about my own life. It was super confusing. So despite the red flags waving and the emergency sirens wailing in my head, I wandered over to Barnes & Noble with him.

As we perused the shelves, we discussed our favorite books. After a few insightful comments about some of my most loved novels, he suggested that we head to “the best spot in the whole store” and proceeded to lead me to the DVD section…

With a cry of delight, Bundy picked up a boxed set of the entire Magic School Bus series and hugged it to his chest. He didn’t buy it, though. He already owned it! Besides, although he loved the adventures of Ms. Frizzle, we still hadn’t reached his favorite cartoons.

He moved on to the preschool section. I watched incredulously as he thumbed through the Franklin selection, his excitement barely contained. Bummer – he already owned all the titles they had. So he skipped over to the Little Bear stack. “Have it, have it, have it,” he muttered as he read the title of each DVD. “OH YES! A NEW ONE!” he suddenly announced in triumph. But his glory was short lived. With a sigh, he put back Little Bear’s Rainy Day Tales because it “sounded kind of boring.” I put my sugar-coating apron back on. “I like kid movies, too. But I like Disney and Pixar and DreamWorks movies. Bundy, can I ask you how you ended up getting so into preschool shows?” That was my sweet little way of expressing “DUDE, what the &%$#@ is wrong with you?!?”

“Get into them? I never got out of them! I started watching as a little kid and just never stopped! When I enjoy the gentle adventures of Franklin the turtle, it takes me back to a simpler time. I was innocent. I didn’t have stress or worries back then. So now there’s nothing more relaxing than coming home from a hard day at work, heading up to my bedroom with a nice mug of Earl Grey, and kicking back with Little Bear and his friends.”

Bundy walked me back to my car and thankfully only went in for a hug instead of a kiss. But his handsome alter ego was back. He had me laughing again with more funny jokes and comments. I WAS SO CONFUSED. Driving home, I didn’t feel like I’d just narrowly escaped becoming Bundy’s new skin suit. It was only with hindsight did I realize that my date might as well be a new episode of Criminal Minds.

Safely at home, I pulled out a notebook and wrote down all of my thoughts. I organized them into three columns – good, bad, and terrifying. The next morning at church, I shared the whole story and notes with best friend Katie. Unlike me, Katie does not sugar-coat things. She asked me if I was out of my mind. I whipped out my phone and texted Bundy right then:

ME: Hey! I’ve been thinking about our date. You’re great guy, but I’m not really feeling a romantic connection with you…

ME: I think you’re awesome! But I know you’d be happier with someone who shares more of your interests, and ditto for me.

BUNDY: DITTO FOR YOU?!?! YOU’RE HEARTLESS. YOU NEVER EVEN GAVE ME A CHANCE. YOU DON’T EVEN KNOW ME.

ME: I didn’t mean to sound flippant. I’m sorry if I’ve upset you.

BUNDY: I GUESS YOU JUST WANTED TO STRING ME ALONG! YOU PROBABLY HAVE A WHOLE BUNCH OF GUYS ALL LINED UP WAITING FOR THEIR TURN TO DATE YOU SO YOU CAN CRUSH THEM TOO.

Bundy is the only guy I’ve ever rejected who had such an angry reaction. I’m sure his intention was to hurt my feelings by calling me heartless. It didn’t work. Actually, I was amused and flattered that he assumed I had “a whole bunch of guys lined up waiting for their turn to date me.” They say that what doesn’t kill you makes you stronger. I guess that’s true in this case. As a potential serial killer, Bundy probably did want to kill me! Funny enough, he ended up giving me an ego boost instead.

So, yeah… Never trust a guy who wants to show you a picture of his dead cat.